Desiree is a hard-working young mother with a sweet personality and a smile that can light up a room. Visit with her for just a couple of minutes, and you will discover a young woman with virtually limitless potential. There was a time however, when Desiree’s future did not look so promising. Her life was wrecked by an addiction she simply could not overcome.

Desiree was the mother of three handsome little boys when a severe drug addiction took control of her life. Her habit resulted in several jail sentences, but there was a far more painful consequence to her actions—her beloved sons were eventually removed from her home. The pain of losing her boys provided Desiree with the motivation to get herself clean, but doing so would be no easy task.

“No matter how hard I tried, I just couldn’t manage to stay sober,” Desiree said with a hint of hopelessness in her voice. “I knew at that rate, I was never going to be able to get my boys back.”

Further complicating her situation, Desiree became pregnant once again with her fourth child. It was Desiree’s probation officer who put her in contact with Angels’ Cove. Upon finishing rehab, she came to live at the maternity center—a move that proved to be a turning point in her life.

With the help of the Angels’ Cove staff, Desiree immediately began working to put her life back together. In the process, she had the opportunity to see God begin to work in her life. One major challenge she faced was finding suitable employment that would enable her to provide for herself and become more independent. The challenge for many of our young mothers is finding a job with a schedule that corresponds with daycare hours. Desiree interviewed for a job at a local restaurant, which would potentially provide her with good pay and perfect hours. The interview went well, but she never received a call back on the job. Later that week, she had another interview, but the staff was so incredibly rude to her she left feeling completely dejected. That is when she turned to the Lord for help. 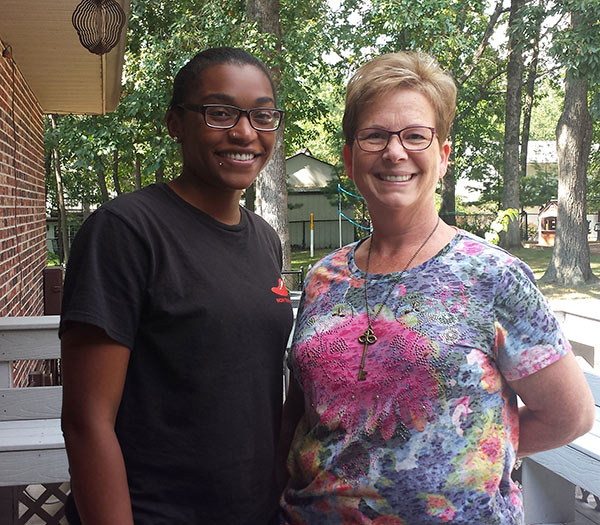 “I was so upset,” Desiree remembered. “I went back to my room, prayed and asked God for help.”

Later that afternoon, she received a phone call from Chili’s (the original restaurant) wanting to set up her orientation. The Lord had gotten her attention and Desiree began to flourish in her new line of work.

In April of this year, seeing the great strides Desiree had been making while at Angels’ Cove, we asked her to share her testimony at our Executive Director’s Dinner at Logan Street Baptist Church in Mt. Vernon, IL. She was extremely nervous, but agreed to speak. Desiree’s drug use had caused her teeth to decay and crumble. To say that this made her feel extremely self-conscience was an understatement. They were in such bad shape her dentist told her they would all have to be extracted to prevent further infections. Desiree longed to have her old smile back, but dentures and implants were going to cost several thousand dollars. Her counselor encouraged her to make it a matter of prayer.

On the night of the dinner, Desiree’s parents and all her children came out to provide her with love and support. Though nervous, she did a tremendous job sharing her story with those in attendance. Desiree did not mention the situation with her teeth, but her counselor joined her on stage and mentioned a great need that she had in her life. Inspired by her story, several people approached BCHFS staff after the dinner, wanting to help. When all the donations were counted at the end of the evening, we had received the exact amount needed to provide Desiree with a brand-new smile. This was, yet, another miraculously answered prayer!

In July, Desiree was fitted with her new dentures, a gift Desiree will likely never forget.

“I am so thankful for all the people who helped provide me with a new smile,” Desiree said. “It has taken a huge burden off my shoulders. I am so much more confident around new people. I have even noticed that people are more apt to talk to me than ever before. But, I think the greatest gift was when I smiled for the first time and my son said, ‘I got my mommy back!’”

Desiree has done so well in our program that she has been granted extended visits with her three boys and continues to work toward full reconciliation. She has earned her driver’s license back for the first time in 10 years and is working toward buying her own vehicle and finding suitable housing. She plans to go back to school when her youngest is a little older with the goal of attaining her CNA degree.

“Through all this, I have learned that God is real,” states Desiree. “He has provided for me at times when I least expected it. I love going to church with my children and watching them learn Bible stories. Being at Angels’ Cove has changed my life.”

And if that’s not a reason to smile…we are not sure what is.