Benita is one of our precious Angels’ Cove moms. She has older children who were removed because she was homeless. She came to Angels’ Cove for this pregnancy so she could keep her baby and work toward reuniting with her other children. In the beginning, she was angry and hateful but gradually you could see the changes God was making in her life. Her facial features began to soften as she grew in the Lord. The following is a testimony written by Dora Riley, Angels’ Cove housemother, about a recent visit Benita shared with her children.

“Recently we purchased a Jesus Storybook Bible for Benita and encouraged her to read it with her children. During one recent visit, they read the story titled ‘The Present,’ the recounting of God’s command for Abraham to sacrifice his only son Isaac. As her son read the verses, he suddenly stopped and told his mom he didn’t like the story because he thought God was mean. Benita said when she had read the story earlier, she also thought God was “bogus” to make Abraham kill his own son, but she told her son to read the rest of the story to see what happens. The boy was mad and didn’t want to read it, but her other son took the book, looked at the end of the story and said, “Isaac didn’t die!” The boys finished reading the story. Benita was excited about the ending and also excited to see her sons enjoying the Bible, while improving their reading skills.” 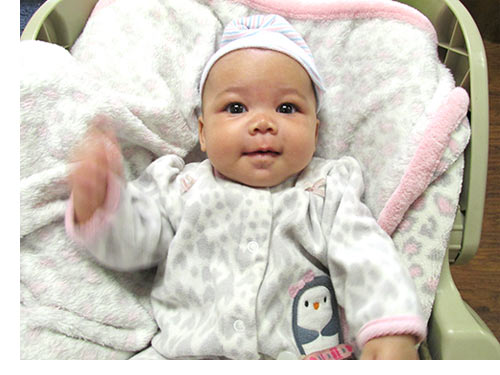 Benita and her sons needed to read the end of the story to see God’s redemptive work. If we were to stop reading Benita’s story too soon, we might miss out on the wonderful redemptive work God is doing in her life. We hope you will join us in praying for Benita and her family.