BCHFS is blessed to have a wonderful staff of dedicated Christ-followers who often go above and beyond the call of duty to help shape the spiritual growth of our residents. Phil Mitchell has been the Maintenance Specialist on our Carmi campus for the past 15 years. In addition to maintaining the beauty and functionality of our campus, Phil often shares Bible devotions with our cottages and involves our residents in service projects to help them experience the joy of helping others. Recently, Phil was asked to share about a service project that was particularly meaningful to him. Phil walked over to his old metal desk and pulled out three sheets of lined paper where he had hand-written his account of just such a day.

Sarah and Shelby were students at Residential Care in Carmi. Earl and Mary Pershbacher were their primary houseparents. Earl always referred to Sarah and Shelby as Laverne and Shirley.

While in residential care, Sarah was the primary student mowing assistant through the summer and later helped Shelby keep the gym (Activities Building) clean and organized. Shelby was the faithful gym cleaner/organizer for quite some time. The reason she kept that job longer than usual is because she had shown herself to be trustworthy.

Sarah and Shelby spent Veterans Day bringing joy to two households. Out of school that day, they both got up early and loaded the BCH flatbed with dry seasoned firewood from our Otho Williams Barn. This wood, split and neatly stacked, was made available by the many work groups who come to do mission projects on the BCH campus. We would be unable to keep and maintain the BCH properties without the help of our Latreia and other volunteer groups. We certainly couldn’t survive without the help of the many faithful churches and private donors who make possible all that BCHFS accomplishes for the Kingdom. Thank the Lord for you all!

After loading the wood, Shelby and Sarah delivered it to Patty’s house. Patty is a widow who lives in the country on a fixed income. She supplements her heating costs with a wood burner in her house. Patty is not the type to ever expect or beg for help, but she knows to pray. When the wood arrived, she beamed with radiant joy, giving praise to the Lord as she helped stack the wood next to her house. She also talked about the hardships she endured as a young person, but assured Shelby and Sarah that a relationship with Jesus can heal all wounds and bring peace to any situation. 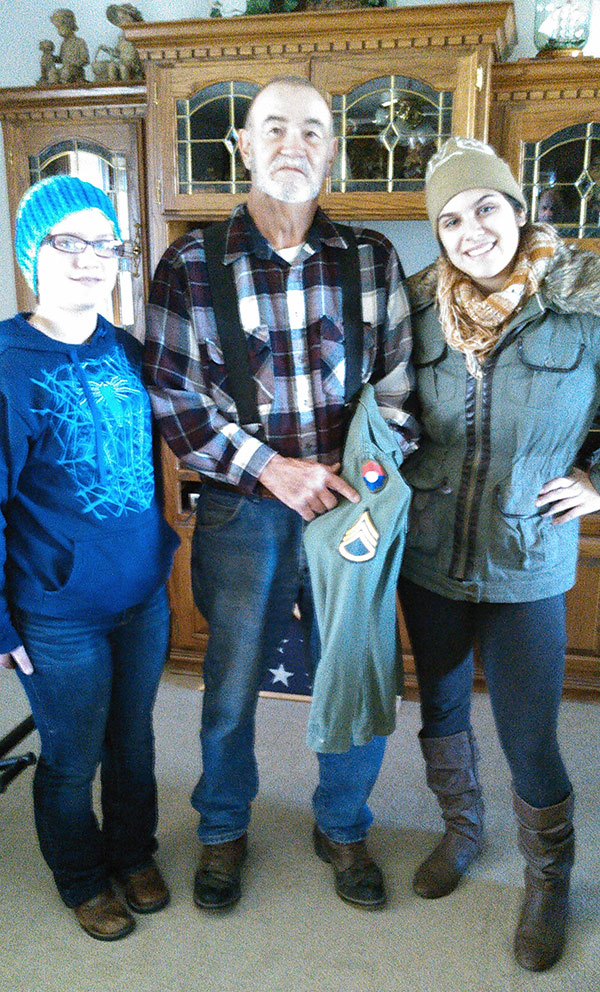 After leaving Patty’s home, the two girls went to their next visit at the home of John and Carolyn Gunter. John was drafted into the U.S. Army in 1968 after being married to Carolyn for a few short years. He humbly shared the complete story of his experiences, showing Shelby and Sarah the commendations he received.

One of the medals he earned was the Combat Infantry Badge, given only to those who engaged in five or more combat firefights. He explained how that medal was worn above the rank of every worthy soldier, including generals. He told the girls that when he came back from Vietnam, there were no celebrations or thanks awaiting him, just rioting and disrespect. Only a few locals told him that they were glad that he survived. John was touched that these two young ladies would take the time to come and thank him and Carolyn for their sacrifice, loyalty and duty during the Vietnam War. Let us all take time to reflect on the freedom we have due to those who served and are serving, and to the grace of God.

The next week, Sarah and Shelby again visited Patty, John and Carolyn. A former carpenter, postal worker, pastor and cowboy, John saddled up a couple of horses and gave Sarah and Shelby a memorable afternoon of riding and learning. Please pray for Sarah, Shelby and all our BCHFS residents and staff.

Note: Some names have been changed to protect their privacy.
By Phil Mitchell, BCHFS Carmi Maintenance Specialist